From Australia to BC: Improving Data Collection with CoastTracker 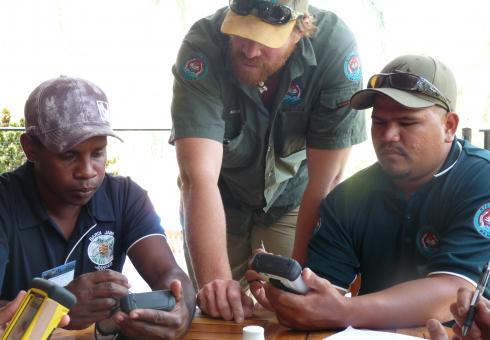 The Regional Monitoring System was first introduced to coastal Guardian Watchmen at their annual gathering. Everyone was issued a yellow plastic binder with Rite in the Rain paper field cards for collecting data while out on patrol.

At the same gathering, an Australian colleague, Rod Kennett, gave a presentation on the work of Indigenous rangers in northern Australia. When he pulled out a handheld data collection device called the ‘I-Tracker’, everyone in the room said: “We want one of those.”

Thus the ‘CoastTracker’ was born. CoastTracker is a digital data collection system that uses tablets with open-source software for inputting data, photos and voice memos in the field. The data can be collected ‘offline’, then uploaded to an online data management system when Wi-Fi is available.

CoastTracker has improved the accuracy, quality and quantity of data being collected. It has also improved the ease and speed of getting data into a data management system so managers and office-based staff can get access.

The first version of the CoastTracker was a ruggedized and expensive handheld device. It was programmed using CyberTracker, an open source software used by Indigenous field staff around the world. Since then, CoastTracker has evolved to use less expensive consumer grade tablets. The Coastal Stewardship Network is developing their own application that allow for complex data collection. It will be Android based, with live maps, the ability to track your patrol while out in the field, and improved data editing functions.