Skip to main content
What do Indigenous Guardians do? 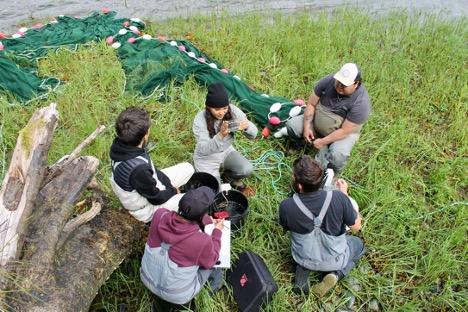 During the summer of 2021, the Ahousaht Stewardship Guardian Program undertook a variety of stewardship activities. From collaborating with Central West Coast Forest Society—who Guardian Program Manager, Danny O’Farrell, notes has been one of Ahousaht Guardian’s biggest supporters and instrumental in securing funding on numerous projects; monitoring the impact of sea lice on wild fish in collaboration with Nuu-Chah-Nulth Tribal Council (NTC) and Cedar Coast Field Station; to working with the Strawberry Isle Marine Research Society to survey the rebounding sea star population, Ahousaht Guardians have been incredibly busy.

Ahousaht Guardians have also been doing regular patrols of the territory, and collecting a newly instated voluntary stewardship fee from guides and tourists who use and benefit from Ahousaht traditional territory.

“I had no faith [at first] when we fixed that thing up. But from how it was to how things are now—it’s a million times better.”

“The river [originally] looked like a bomb went off. We planned two weeks for the project, and it took 3-4 days. Two weeks later there’s already fish using the habitat we created.”

As the Anderson Creek project was completed much faster than expected, Ahousaht Guardians were able to redirect remaining funds towards additional projects such as restoring Bedwell Creek, enabling Guardians to save and relocate 1,000 Coho fry from pools that had become disconnected from the rest of the river system—a highlight for everyone involved.

To learn more about the MHSS and the Ahousaht Stewardship Guardian Program check out their profile on the Indigenous Guardians Toolkit Map, the MHSS website, Facebook, and Instagram.

What do Indigenous Guardians do?