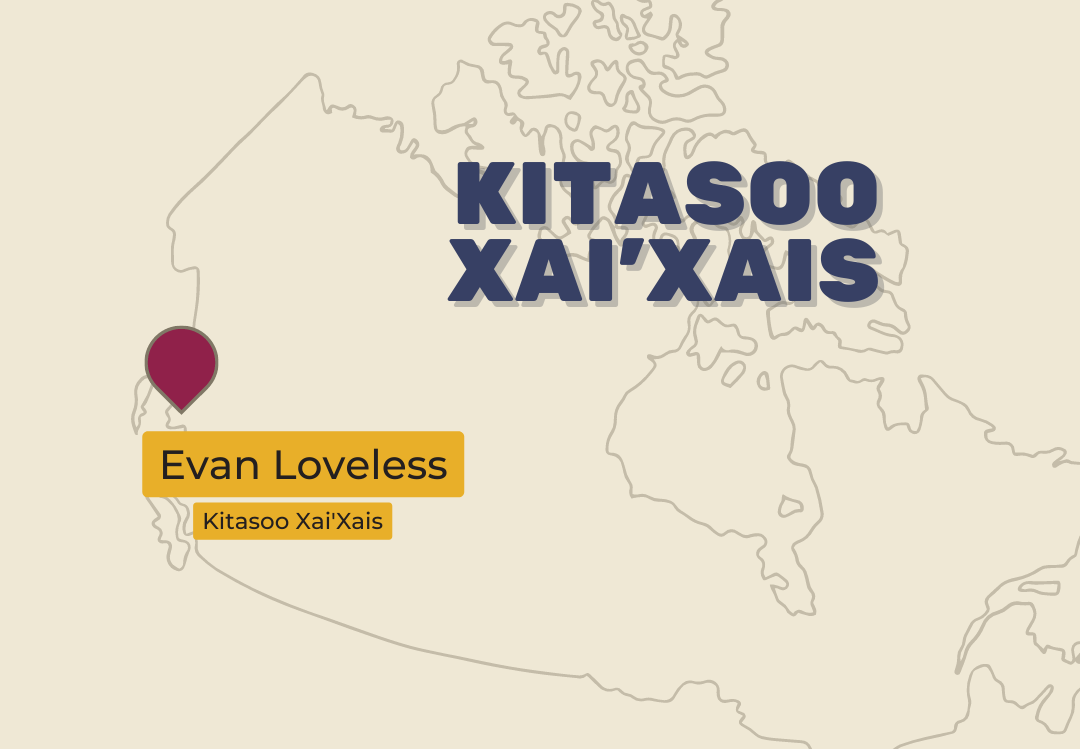 Evan Loveless is the Stewardship Advisor with Kitasoo Xai’Xais First Nation and has worked closely with the Nation for many years. This conversation is an excerpt from the June 2022 webinar, Indigenous Guardians & IPCAs, co-hosted by Nature United’s Indigenous Guardians Technical Support Team (TST) and the Conservation through Reconciliation Partnership (CRP), and has been edited for clarity and length. Watch the full conversation here.

Kitasoo Xai’Xais has recently entered into a new agreement with BC Parks and has also declared a new marine protected area. Can you explain this new agreement and how it will affect Guardians?

This agreement is also a pilot program where the intent is to learn and see how this kind of arrangement can be built out and exported into other Guardian programs. We hope other organizations will want to help us learn from this pilot through building case studies and crafting other resources so others can learn from us in a formal way.

What steps did Kitasoo Xai’Xais and Nuxalk take to put this agreement into practice?

There are three main components to this pilot. First we needed a legislative tool for the pilot to be possible. In British Columbia, the Park Act already enables ‘classes of people’ that can be Park Rangers, so we were able to work within the Parks Act as it already exists.

Next, our Watchman needed the appropriate training to be able to carry out the duties and responsibilities of a Park Ranger. Three people from each Nation–two Watchmen coordinators, and four Guardian Watchmen–went through a formal parks administration training course and have also participated in numerous Park Ranger trainings alongside BC Park Rangers.

The third piece, and perhaps the most complicated, is developing the policies and procedures for the Watchman to do this work. The Watchmen are not only carrying out the authorities and responsibilities of a Park Ranger, but those of Kitasoo Xai’xais or Nuxalk Watchmen as well. In order for the Watchmen to be protected while they fulfill this dual role (enforcing both the Nation’s laws as well as BC’s laws) we need to make sure that their authorities are clearly documented. That way we know that all of the checks and balances are there and that they have the backing of the Nation they are working for. Developing those policies and procedures is something we are continuing to work on.

Are any of the Nation's laws being enforced by BC Parks Rangers? Or is it mainly Guardian Watchmen who take on this dual responsibility of enforcing both the Nation’s and Crown laws?

BC Park Rangers are often supporting the initiatives and wishes of the Nations in our protected areas, but do not formally enforce the Nation’s laws. We have a long history with BC Parks and, for a number of years, have worked with them quite collaboratively. One of the ways we have done this is through a formal collaborative management board. We meet at least twice a year to go through our approach, our planning, permitting procedures, and really anything happening in those protected areas. The BC Park Rangers end up enforcing something that's been built by the Nations and BC Parks because all of the management plans that guide their work were developed in partnership.

How has relationship building between the Nuxalk, Kitasoo Xai-xais, and BC Parks over the years led to this type of agreement being possible?

This agreement didn't come out of nowhere, it is based on a long standing relationship that we have with BC Parks. In 2005, some more recent Conservancies were established as part of the land use planning process in the Great Bear Rainforest. At the same time, several Nations entered into Collaborative Management Agreements with BC Parks when those protected areas were established. While things have progressed in terms of co-governance and co-management, those earlier Collaborative Management Agreements were pretty groundbreaking at the time and still are today.

From that close work with BC Parks came the trusting and respectful relationship, which continues to serve our goals today. All of our management planning that we do for our protected areas–permitting, research, operations, etc.–is done collaboratively, and that is possible because of the relationships we have built. If we didn't have those champions within BC Parks it would have been much more difficult. A lot of that good work happens through building relationships with crown agencies and the people that work for them. It doesn't negate the need to have solid agreements and reconciliation frameworks to hold the crown to account, but at the same time having those relationships is important to continue pushing the bar.