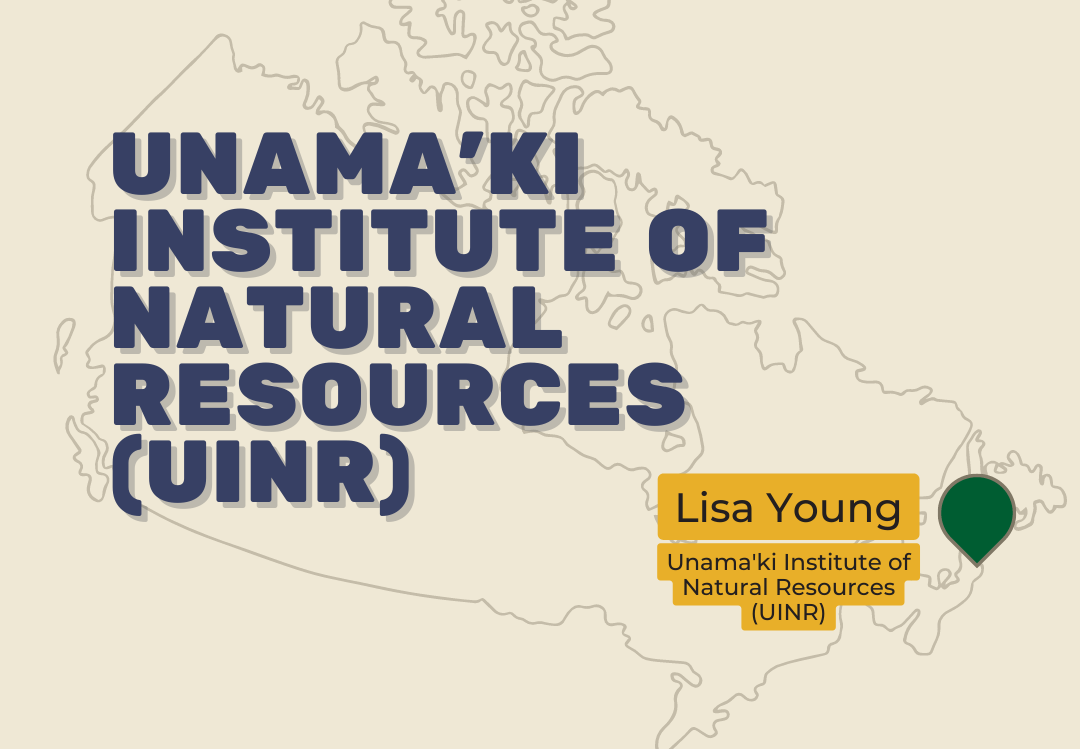 Lisa Young is the executive director of the Unama’ki Institute of Natural Resources (UINR). UINR is currently partnering with the Confederacy of Mainland Mi'kmaq (CMM) to create a land Guardian network in Nova Scotia on behalf of the Assembly of Nova Scotia Mi’kmaq Chiefs. Lisa is also part of the Conservation through Reconciliation Partnership (CRP) working to further the establishment of Indigenous Protected Areas. This conversation is an excerpt from the June 2022 webinar, Indigenous Guardians & IPCAs, co-hosted by Nature United’s Indigenous Guardians Technical Support Team (the TST) and the CRP, and has been edited for clarity and length. Watch the full conversation here.

Tell us a little bit about your history with the Unama’ki Institute of Natural Resources (UINR).

I started out at UINR as a biologist. My background is in science, so a lot of the early work I did was out in the field with the Department of Fisheries and Oceans (DFO), Parks Canada, and alongside our community’s Aboriginal Fisheries Strategy (AFS) Guardian program. A lot of our working relationship began through collaborative projects around moose management with Parks Canada and the province of Nova Scotia, and I was also involved in the technical support work around those initiatives.

Currently, my role is as the executive director for UINR. I went from being mainly in the field to program development, including our Earthkeepers program and IPCA program.

Can you explain how the on-the-ground work of Guardians relates to establishing an Indigenous Protected and Conserved Area (IPCA)?

Very early on our community and organization recognized the value that Guardians play in envisioning how we would protect our area. We've been advocating for a Guardian program for quite a while, but it wasn't until recently that we received funding though Environment and Climate Change Canada (ECCC) to support a land Guardian program. This opportunity allowed us to reframe the work that we (and many other Indigenous communities across Canada) were doing within the framework of an IPCA.

We saw Guardians as crucial for a number of reasons: Guardians wear multiple hats because there are a lot of gaps in the current governmental approach to protecting land. The whole idea of stewardship and land relationship is not there and we see Guardians filling that role. While these Guardians are qualified technicians, they're also very knowledgeable about our culture and our language. Guardians support our biologists in the field, looking at species and risk monitoring or seed collection for restoration projects and forestry, but we also see them as a liaison with our communities, helping facilitate community reconnection with the land.

We are building our management and land stewardship programming to be informed by the land. As our elders would tell us, “the land will tell you what it needs” and we're really taking that to heart. Whether it's an IPCA or our new forestry programs, we want the information we collect and the decisions being made by our leadership to be informed by the land. If we really want to change our relationship with the land then the Guardians are a vital component of that.

So the Guardians are helping relay what the land needs to people who are in decision making positions. Is that right?

Yes–and vice versa. Anyone who knows or has been involved in IPCA discussions knows that IPCA's are not just about protecting biodiversity, but also about revitalizing Indigenous governance systems, language, culture, reconnection and reconciliation with the land. A big part of that work is healing our community, and people need to be on the land to do that. We can see our Guardians playing a role in facilitating that healing by bringing our youth on the land, bringing our elders and youth together on the land, and helping support that exchange.

When you talk to Environment Canada, they put a lot of emphasis on education and awareness, hoping that people will be convinced to do the right thing. Those values are already so ingrained into our Indigenous cultures, that it’s not education awareness for us, it’s cultural revitalization. We see cultural revitalization as being an important component in protecting our land, and the Guardians are a huge part of that.

Have you seen the Guardian’s roles change as the IPCA has been established? Has their work been altered through this new initiative?

The work has not really been altered, the vision remains the same. What is shaping that vision as we develop the program are more practical matters–so asking ”how much funding do we have?”, ”what training opportunities are out there?”, because our funding mainly covers some salaries and travel dollars, but there isn’t a lot left to go towards training.

A lot of the training we’ve been doing is through established partnerships with Parks Canada and the Department of Natural Resources (DNR), such as job shadowing and assisting with Parks Canada or DNR projects. It’s an opportunity to further those long standing relationships we’ve built. The Guardians gain and develop transferable skills through these opportunities which can now be applied to our IPCA or any of our other initiatives.

Can you share a bit about the agreements you are entering into (or have entered into) with Parks Canada? How have you approached them and what have some of the outcomes been?

There’s a lot happening in terms of negotiation and agreement within Nova Scotia. We found that our earlier collaborations with Parks Canada and the Department of Lands and Forests around moose management, and establishing those on-the-ground relationships, really opened the door for higher-level negotiations around collaborative governance because it demonstrated to those other stakeholders what a co-governance relationship could look like before it became official.

We now have an opportunity to do something similar to what Kitasoo Xai’xais and Nuxalk are doing but instead of the enforcement component, our Earthkeepers would work as technicians and resource support. Earthkeepers would still be working with CMM and UINR, but specifically in the park. In many ways, that relationship is already happening by our staff supporting the work being done in the park. This has allowed us to gain capacity and created space for the recognition that Indigenizing the park (a goal of Parks Canada) is already happening through having Mi'kmaq Earthkeepers be present. When people come into the park it is evident that they are in Mi’kmaqi territory and they are able to gain a better understanding of the role the Guardians play in that. Now that we have the resources to make the most of this opportunity, this agreement is taking that relationship between UINR and Parks Canada to the next level. The door has been open, but the capacity hasn't been there to fully realize what we could achieve with that opportunity. This program is now allowing us to do that.