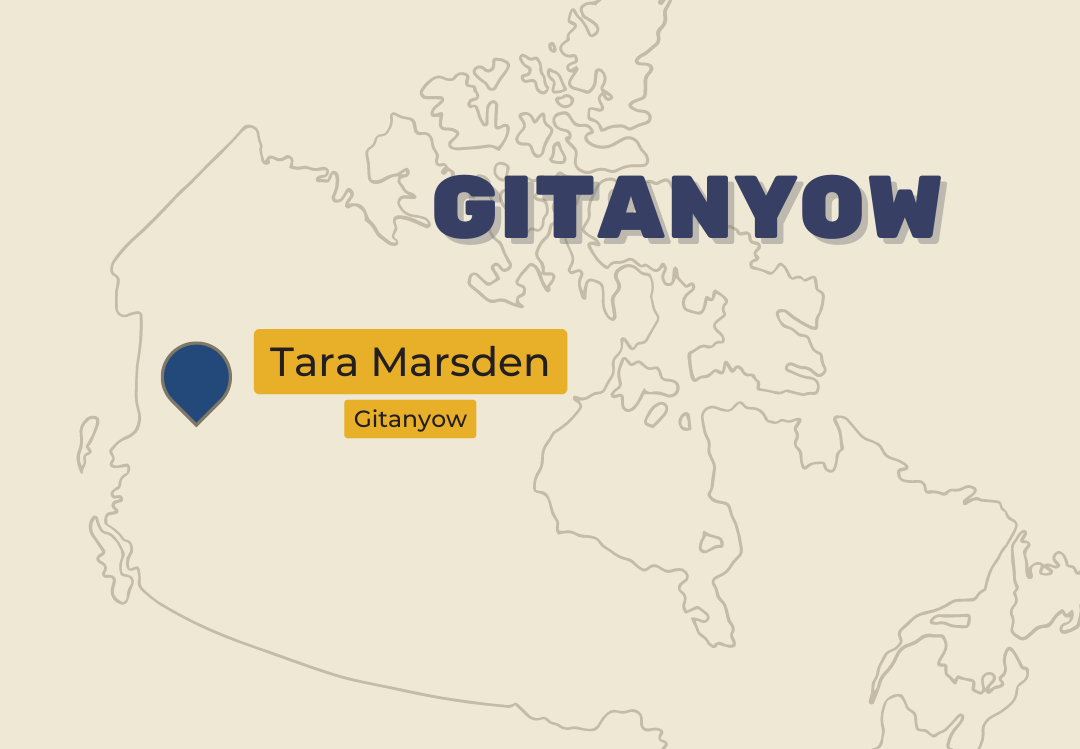 Tara Marsden is Wilps Gahmlaxyeltxw, Wilp Sustainability Director and lead for the Wilp Wii Litsxw Meziadin Indigenous Protected Area (MIPA). Tara is a long-term, consistent, and essential force in Gitanyow land use planning and IPCA initiatives, and helps to integrate the work that Guardians do. This conversation is an excerpt from the June 2022 webinar, Indigenous Guardians & IPCAs, co-hosted by Nature United’s Indigenous Guardians Technical Support Team (the TST) and the Conservation through Reconciliation Partnership (CRP), and has been edited for clarity and length. Watch the full conversation here.

Can you introduce your role and give us an overview of the Gitanyow Lax’Yip Guardian program and IPCA that you have been establishing and how they relate to each other?

My main role with Gitanyow for the past ten years has focused on how we implement our land use plan and this has included fundraising and communicating to other governments as well as proponents and stakeholders on the territory. The Guardians are central to ensuring that our land use plan is being followed. Further to that, we've established the Wilp Wii Litsxw Meziadin Indigenous Protected Area (MIPA) locally.

The Wilp Wii Litsxw MIPA in Gitanyow was declared relatively recently, but is the result of a long term body of work (such as the well established Gitanyow Lax’Yip Guardian program and land use plan). Can you tell us about that progression?

There was a well documented increase in moose harvesting, including cow and calf harvest, which led to a population crash from around 1500 to 500 moose in the Nass watershed. We wanted to ensure that our people were doing their best in terms of conservation and so we implemented a permitting program in 2011.

Our hereditary chiefs were the signatories to these permits, and the Guardians were responsible for ensuring that permits were being issued and that people out on the territory had their permits on hand while hunting. If you wanted to go into a specific area you needed the Wilp Chief’s–the traditional title holder to the area–permission and to have that permit with you.

This program still exists today and with the hard work of the Guardians, the compliance of our own people, and of our neighbours to stop the cow and calf harvest, we were effectively able to shut down non-Indigenous hunting in our area and relieve the pressure on our moose population. Now the population is up to just over 1000, not back to full numbers, but that's part of the ongoing Guardian’s work–to do aerial surveys and work with the provincial government to count moose every five years.

In establishing the Gitanyow Lax’Yip Guardian program we learned that it doesn't take much to get a Guardian program started, but you need the commitment to keep sourcing funds, to keep sourcing training, and to keep people employed. When we first envisioned the Guardian program we wanted Guardians to be employed year-round and to have their authority as Guardians throughout the year. Fundraising was critical to get that going and we only really started to get that year-round funding around 2014-2015 from various places.

With the establishment of the Indigenous protected area in Meziadin, I just can't imagine doing that without having guardians in place first. Each Nation is going to have their own journey, but for us I felt so much more confident in establishing this Indigenous protected area knowing we already had the people in place. They were at the launch event, they were shuttling elders around on the quads to parking, and giving information–they're just such a natural fit to establishing our own protected area.

What are some of the challenges that you faced in establishing your IPCA and what has been the role of the Guardians in navigating those challenges?

We established our IPCA in 2021 in Gitanyow ayookxw (Gitanyow law). This was after about six years of negotiation with the provincial government to expand the Hanna Tintina Conservancy. Hanna Tintina was established in our land use plan and already protected historic spawning habitat for salmon in the Nass watershed. With climate change we saw that this creek, which previously had not been a productive spawning habitat, was becoming much more productive. [It was also] unprotected, and a target for mineral exploration.

The biggest challenge has been dealing with the BC mining sector. People can go online and get a mineral tenure in our territory without Gitanyow receiving notification, this is called ‘free entry’. Every other activity on our land has consultation–and we seek consent–but the system that's currently in place for mining is really outdated and colonial. There's a BC court case from Gitxaaxla Nation to challenge this system, but the province is otherwise open. Good discussions are underway with the province to expand and recognize our protected area in their (Canadian) laws, but our (Gitanyow) laws are firm. We want to see no mining in this area. Our Guardians are there as educators and monitors who report back to the Chiefs, and we're really hopeful that the province will continue in good faith to protect this area as well.

How do you engage companies that disregard Indigenous sovereignty?

Thankfully, out of eight companies there's only a couple where we have this problem. We have engaged a large circle, including some philanthropic organizations, who are open to compensating permit holders in order to get them off of the territory. Our approach is diplomatic but very firm and we have the courts available to us as well. When industry wants to disregard and ignore our laws we add that to the list of damages in our active title case where the crown will have to compensate. We are also supportive of the Gitxaaxla Nation case and the concerns they are bringing forward. I think there's going to be a growing number of Nations who support Gitxaaxla Nation and call for the Mineral Tenure Act to be reformed.

You mentioned earlier how climate change impacted the productivity of some streams in your territory. How is the information Guardians are collecting being used to adjust and adapt for climate change?

Our land use plan is adaptive in nature–wherever we gain new information from our Guardians that is the foundation for change. Any plan has to be dynamic, especially in the face of climate change. We have to adapt our protected areas to protect the values we originally sought to uphold. If there are changing habitats, behavior, or further risks, then that has to be built into the plan.

That's why Indigenous-led conservation is so different and exciting–it isn't static. We don't put things on paper and then lock it away and never touch it again, it’s living. Our management plan is visionary, it isn't about keeping people out and keeping things pristine–that's not how we manage our territory. We're active on our territory. We want to see development, but we don't want to see destruction. That’s a very key difference for Indigenous protected areas.